On January 1, 1959, military dictator Fulgencio Batista fled Cuba, his regime toppled by a Revolution composed of multiple democratic organizations. Fidel Castro, head of the 26th of July Movement, the Revolution’s largest group, assumed political power shortly thereafter. Although he had vowed to restore democracy and constitutional rule to the island, it became apparent before year’s end that he would use his power instead to establish a ruthless Communist dictatorship. Pro-democracy Cubans, determined to put a stop to the new leader’s totalitarian designs, immediately began organizing a resistance. With all peaceful outlets for dissent shut down by Castro’s emerging police state, armed struggle soon became their only option.

Manuel Artime, a democratic Catholic activist and former anti-Batista rebel, was among those who opposed Castro’s embrace of Communism. After resigning from the government, he helped establish a democratic underground group in Cuba (the Movimiento de Recuperación Revolucionaria, or MRR) and secretly left for the United States in December 1959. On behalf of the pro-democracy resistance and with the promise of assistance from the United States, he began laying the groundwork for the creation of a military force that would return to Cuba and free it from Communist rule. In the spring of 1960, he and other prominent exiled Cuban leaders formed the Frente Revolucionario Democrático, a coalition of pro-democracy organizations that would constitute the political arm of the operation and provide the basis for future constitutional rule in Cuba. Soon afterward, the liberation army’s first sixty-six recruits, made up of largely of MRR-recruited Catholic student activists and young ex-military officers from

Cuba’s Constitutional Army with no previous political connections to the Batista regime, were gathered at Useppa Island off Florida’s southwest coast for screening and evaluation. That summer, training camps for the liberation army and air force were established in Central America and men from the growing Cuban exile community in the United States enlisted over the next several months. A cross-section of Cuban society, the members of the all-volunteer force were united by the single objective of ousting Fidel Castro and restoring democratic, constitutional rule in their homeland.

The initial plan for the exile army, later christened “Brigade 2506,” was to launch a guerrilla war in Cuba. In the fall of 1960, these plans were scrapped in favor of a landing at the coastal city of Trinidad, which the Brigade’s air and ground forces, including paratroopers, were to seize and seal off to protect a democratic provisional government that would be established there. Because the Brigade’s combat airplanes were B-26 bombers, and because they were slated to operate from the combat zone in order to cut off the enemy’s access to the city, the strategy’s success hinged entirely on the destruction of Fidel Castro’s fighter aircraft on the ground before the landings in Cuba. 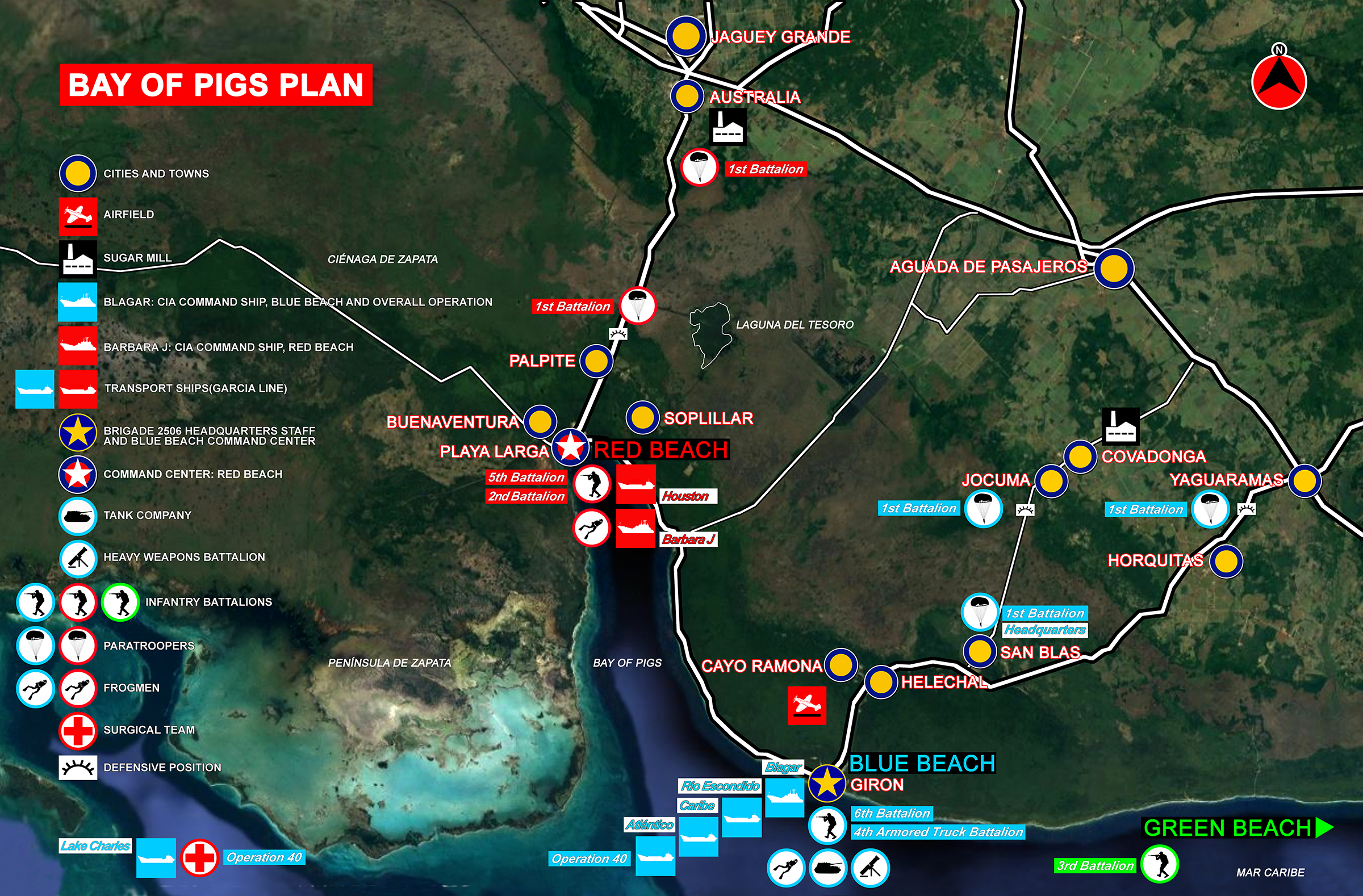 When John F. Kennedy was sworn in as President of the United States in January 1961, his administration, in a misguided attempt to bolster the “plausible deniability” of U.S. involvement, began making disastrous changes to the plan. The landings were moved from Trinidad, an ideal landing site, to the desolate and swampy Bay of Pigs. Days before the April 17, 1961, invasion, the first air attacks designed to eliminate Castro’s air force were scaled back and the planned subsequent air strikes were canceled. Consequently, instead of landing under the “umbrella of protection” it was promised, Brigade 2506 encountered skies dominated by attacking enemy fighters soon after landing in Cuba. Faster and far more maneuverable than the Brigade’s B-26s, the enemy fighters downed a number of Brigade planes, making it impossible for them to carry out their mission of helping to seal off the beachhead from the air.

The Brigade’s ships, meanwhile, having landed their ground troops but still carrying the greater part of their ammunition and equipment, were sunk, beached, or forced to withdraw to international waters because of the Castro fighters. Brigade 2506’s ground units thus faced Castro’s war machine virtually alone with approximately one day’s worth of ammunition and supplies. Possessed by deep patriotism, a commitment to democracy, and an unshakable faith in their American ally, the Brigade battled fiercely for three solid days against overwhelming odds. They ceased fighting only after running out of ammunition. Brigade 2506 never surrendered. More than one-hundred members of Brigade 2506 lost their lives as a result of the Invasion, including four members of the Alabama Air National Guard and nine Brigade members who were executed by the Castro regime (four of whom were members of the Infiltration units sent into Cuba clandestinely in the weeks before the Invasion). 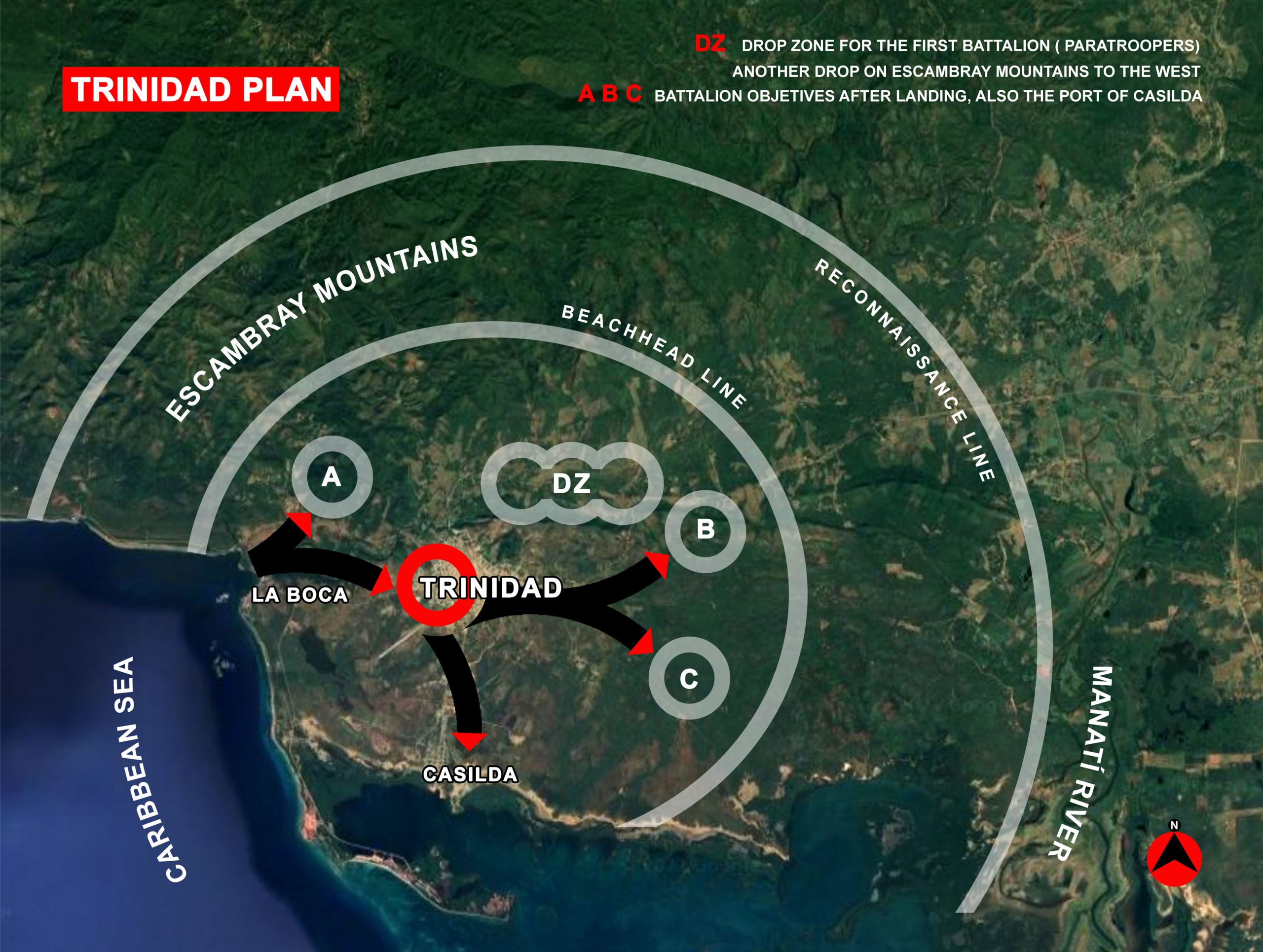 In the days following the collapse, Brigade soldiers were captured by Castro forces in the swamps surrounding the Bay of Pigs. They were subsequently detained in inhumane conditions, subjected to a show trial, and given long prison sentences. Thanks to the efforts of the Brigade Families Committee, headed in Havana by Brigade mother Berta Barreto and assisted by prominent New York lawyer James Donovan, most of the approximately 1,200 imprisoned men were released in December 1962 and returned to the United States. Castro denied the release of nine of the Brigade prisoners; of those, the last was liberated in 1986. Eight members of the Brigade’s Infiltration units, who had been captured, tried, and imprisoned separately, were also given decades-long prison sentences.

For sixty years, Brigade 2506’s effort to bring freedom to the Cuban homeland has been honored by all generations of Cuban Americans. The brave and idealistic men of the Brigade, from the earliest days of the struggle, have held the honor of being the undisputed heroes of Cuban democracy. The love and respect La Brigada has earned in exile undoubtedly will one day be shared by future generations living in a free Cuba.